Parkinson’s disease is a neurological disorder of the central nervous system, which includes the brain and spinal cord.

Parkinson’s arises when neurons in the brain gradually die. Many of the symptoms like tremor, loss of balance are due to the death of neurons that produce a chemical in your brain called dopamine. Meaning people with Parkinson’s don’t have enough of the dopamine. 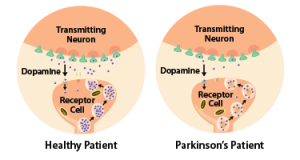 Dopamine is a neurotransmitter which is responsible for controlling movement If there is a shift in levels of dopamine, It will affect movements like slow movement, tremor, and loss of balance.

Coming over to the diagnoses

There’s currently no cure for Parkinson’s disease, but treatments are available to help relieve the symptoms and maintain your quality of life. There have been no stem cell transplants as of yet for Parkinson’s patients. But…

Harvard Stem Cell Institute researchers have found that fetal dopamine cells transplanted into the brains of patients with Parkinson’s disease, as they noticed proteins that pump the dopamine, and mitochondria, remained healthy until the death of the patient. Also, research is going on, on injecting tiny bits of liquefied dopamine nerve cells into the brain via a thin needle.

All of these were the causes, cures and facts about the disease but here’s the impact on the patient because of Parkinson’s:

Social: Due to Parkinson’s your movements are at vital change and so it gives a chance for bulling and make fun of. In the case of Parkinson’s at a young age(rare)

Emotional: Many people living with Parkinson’s experience anxiety and/or depression at some stage during their illness. Also for which people with this disease go to a psychiatrist.