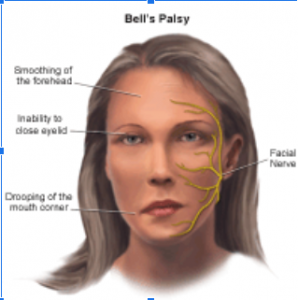 Bell’s palsy is a disease which makes you feel weak or paralyzed and only affects one side of your face.this causes the face to fall and droop from one side. It could also become very stiff Bell’s palsy is caused by a trauma to the seventh cranial nerve this nerve is also called the facial nerve. this diesis is can happen to anyone but in most cases, it happens to people affected with diabetes or those recovering from viral infections. the symptoms following this disease are only temporary.

Bell’s palsy can also be caused by the damage to the facial nerve which can cause swelling as the nerve passes through a narrow bony area within the skull..and when the nerve swells it pushes against the skulls hard surface. this affects how well the nerve works. Researchers, doctors, and scientist also believe that Bell’s palsy can also be caused by viral infections.they have found evidence that suggests that the herpes simplex 1 virus which is a common cold sore can be responsible for a large number of cases of Bell’s palsy

The symptoms of Bell’s palsy are that you may have pain behind the year a day or two before the actual disease is affected.the other symptoms of bells palsy areas listed below
Unable to close the eyelid
Eyes water less or more than usual
Drooling
Decrease sense of taste
Difficulty chewing
Facial muscles twitch
Pain or numbness behind the ear
The facial drooling and weakness reach their peak in a week other symptoms start to slow down in a few weeks time. the minimum time to recover from Bell’s palsy is 3 months. Some may also take up to a year to cure. and there are very rare cases where the symptoms are permanent.

Bell’s palsy is diagnosed by as the doctors call it “diagnosis of exclusion.” which is when the doctors make a list of possible diseases and then delete each one to do this the doctors may use MRI and CT scans to test .the doctor label it as Bell’s palsy when all the others are out of the list.

The treatments for bell’s palsy is mostly natural.the doctors will advise you to wear eye masks to keep your eye from drying down they may also give you eye drops.Your doctor may also give you a list of facial exercises to do.the medications that they give are for example Antiviral medications, such as acyclovir or Analgesics or moist heat to relieve pain and Physical therapy to stimulate the facial nerve.In the very rare time that surgery is needed they doctors prefer transplantation.where they transplant the the nerve from the lower calf or from your lower thigh the neuron is then replaced from the thigh to the face

Talking about the impacts,The impact of the disease on individuals is that this diese if severe can seriously damage your face and if not severe can be cured in 6 months.there are very rare cases which say that bell pansy has not completely cleared through natural treatments or medicines.The impact of the disease on society is that the swelling that occurs due to bell’s pansy makes it very rare to keep up with public events.