Epilepsy is a neurological condition which affects our Central Nervous system. Epileptic seizures are caused by disturbances in the electrical activity of the brain. These seizures may be related to a brain injury or a family tendency, but most of the time the cause is unknown.In two-thirds of patients diagnosed with epilepsy, the cause is unknown.Epilepsy can affect both male and female of any age. Epilepsy can lead to unusual behaviour, sensations and sometimes loss of awareness. 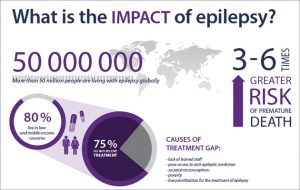 Dr.Joseph Sirven, chair of Neurology at Mayo Clinic Arizona, says, “Epilepsy can affect anyone at any age. 1 out of 26 Americans have a risk of developing epilepsy. Some people are born with it. Some may have a genetic reason for their seizures. Head trauma, infections, strokes, hemorrhages and even Alzheimer’s disease can potentially cause seizures or epilepsy.”

Epilepsy leaves a negative impact on the people suffering with this disorder.Epilepsy is unpredictable. For example people with this disorder may not be allowed to drive or to pursue their career.This can affect the decision making of the person. People who have this disease, they are often not left alone. This disorder affects the brain which harm signals send by the brain to other parts of the body.

Because epilepsy is caused by abnormal activity in the brain, seizures can affect any process your brain coordinates. Seizure signs and symptoms may include: 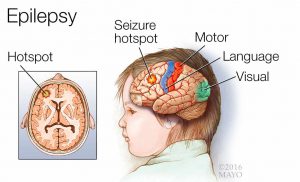 To diagnose this disease, doctors suggest to review your symptoms and medical history.Doctor may order several tests to diagnose epilepsy and determine the cause of seizures. Two techniques used by the doctor are:

Technological advancements have brought a lot of solutions.

Common side effects of AEDs include:

According to Times of India the cost of this surgery is around 2.5 lakhs INR, Which includes all the investigation and hospitalisation.