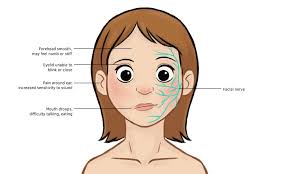 Bell’s palsy is a disease which makes you feel weak or paralyzed, only affects one side of your face.this causes the face to fall and droop from one side.It affects only one side of the face at a time, causing it to droop or become stiff on that side.But it seems to occur more often in people who have diabetes or are recovering from viral infections. A stroke that affects your facial muscles would cause muscle weakness in other parts of your body, too.

It’s believed to be the result of swelling and inflammation (redness) of the nerves that controls the muscles on one side of your face. Or it might b a reaction that occurs after a viral infection.

For most people, Bell’s palsy is temporary. Symptoms usually start to improve within a few weeks, with complete recovery in about six months.

The treatments for bell’s palsy is mostly natural.the doctors will advise you to wear eye masks to keep your eye from drying down they may also give you eye drops.Your doctor may also give you a list of facial exercises to do.the medications that they give are for example Antiviral medications, such as acyclovir or Analgesics or moist heat to relieve pain and Physical therapy to stimulate the facial nerve.In the very rare time that surgery is needed they doctors prefer transplantation.where they transplant the the nerve from the lower calf or from your lower thigh the neuron is then replaced from the thigh to the face.

There is no specific laboratory tests to confirm diagnosis of the disorder. Generally, a physician will examine the individual for upper and lower facial weakness. In most cases this weakness is limited to one side of the face or occasionally isolated to the forehead, eyelid, or mouth. A test called electromyography (EMG) can confirm the presence of nerve damage and determine the severity and the extent of nerve involvement.  Blood tests can sometimes be helpful in diagnosing other concurrent problems such as diabetes and certain infections. A magnetic resonance imaging (MRI) or computed tomography (CT) scan can eliminate other structural causes of pressure on the facial nerve.

Talking about the impacts,The impact of the disease on individuals is that this diese if severe can seriously damage your face and if not severe can be cured in 6 months.there are very rare cases which say that bell pansy has not completely cleared through natural treatments or medicines.The impact of the disease on society is that the swelling that occurs due to bell’s pansy makes it very rare to keep up with public events.