“More than 1.5 million Americans have PD. It typically occurs in men and women around age 60. Early-onset Parkinson’s occurs around age 40.” Parkinson’s disease is neurodegenerative disease where there is a huge loss of cells of brain and spinal code which over time leads to dysfunction and disorders.

PD is a common disease caused by medications such as haloperidol  but still actual cause of PD is unknown.This disease affects dopamine producing neurons in specific area called substantia nigra moreover this is a very menacing disease which has impact on cardiac system which surrounds heart and blood vessels. 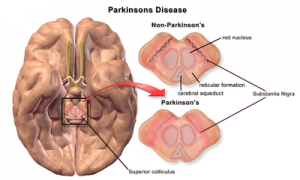 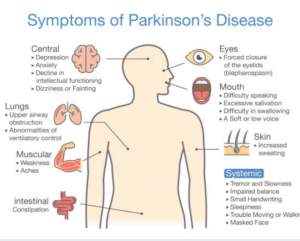 PD has immense impact on a individual.This illness make patients feet and legs stiff which slow down their walking so dependency of patient on family increase.The condition for taking part in family events or any social function had changed and affected their social life.PD patients felt increasingly socially isolated because they felt embarrassed of their situation where some of them had speech problems which made communication difficult.Identity and dignity of patient had morally affected them.Cost to cure PD is placing an economic burden on the healthcare system, society and patients themselves.

There is no specific techniques for identifying PD but specialized doctors identify disease from signs of symptoms and a neurological and physical examination on the other side many doctors suggest single-photon emission computerized tomography SPECT scan called a dopamine transporter (DAT) scan which altogether helps patient make sure the diagnosis.

Many Parkinson’s patients enjoy an active lifestyle and a normal life expectancy so treatments focus on reducing symptoms to enable a more active lifestyle and include medication, diet, exercise, and deep brain stimulation surgery.Maintaining their self care routine helps maintain flexibility and improves balance and range of motion. Surgeries like DBS is provided to them which implant a pacemaker-like device that sends electrical signals to brain areas responsible for body movement. DBS improves the symptoms of slowness, tremor, and rigidity.Other surgical procedures include pallidotomy and thalamotomy, which target specific brain areas.

Implication of DBS is that is causes seizes,strokes,infections,headaches and moreover temporary pain and swelling at the implantation site.Cost of DBS is very high which is economically not possible for everyone.

To sum it up PD is a very dangerous disease which affects patient a lot.