Bell’s palsy is a condition in which the muscles on one side of your face become weak or paralyzed. It affects only one side of the face at a time, causing it to droop or become stiff on that side. 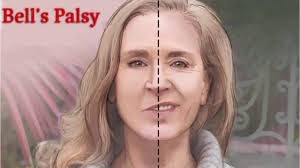 Cause of this disease

Most doctors believe that it’s due to damage to the facial nerve, which causes swelling. This nerve passes through a narrow, bony area within the skull. When the nerve swells even a little bit it pushes against the skull’s hard surface. This affects how well the nerve works.

Signs and symptoms of Bell’s palsy come on suddenly and may include:

In rare cases, Bell’s palsy can affect the nerves on both sides of your face.

Although the exact reason Bell’s palsy occurs isn’t clear, it’s often related to exposure to a viral infection. Viruses that have been linked to Bell’s palsy include the virus that causes:

There’s no specific test for Bell’s palsy. … Other conditions — such as a stroke, infections, Lyme disease and tumors — can also cause facial muscle weakness, mimicking Bell’s palsy. If the cause of your symptoms isn’t clear, your doctor may recommend other tests.

Paralyzed muscles can shrink and shorten, causing permanent contractures. A physical therapist can teach you how to massage and exercise your facial muscles to help prevent this from occurring.

Economical implication on its treatment

Surgery, physical therapy and medication are expensive to do because it is not a one time cost it is going to need financial help very frequently and can cost you a lot of money resulting in the need for financial aids.

People who are affected by this disease might get discriminated by their looks as there face becomes wierd when half there face is paralayzed so people also exclude them from society and discriminates them whenever they see them that’s the social impact of bell’s paulsy.