What is Bell’s palsy : 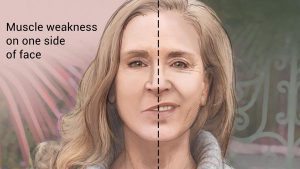 How does the disease occur :

Symptoms of the Disease :

Bell’s palsy is characterised by muscle weakness that causes one half of the face to droop.

– Pain areas: in the ear

– Sensory: abnormality of taste or sensitivity to sound

Treatment for the disease :

Modifies or simulates hormone effects, often to reduce inflammation or for tissue growth and repair.

A covering used to protect the eye from injury.

Treats patients in the emergency department.

Of the total study group, 67% had acquired facial palsy. The mean age of the total group was 44.7 years and 67.9% were female. As a group they were rather less depressed than the normal population with similar levels of anxiety to population norms. The primary motivation for surgery was appearance rather than function. Using interview data in addition to the FPEM, satisfaction with the process and outcome of surgery was assessed. Thirty five percent were very satisfied with both process and outcome, 34% were satisfied with the outcome but found the treatment process stressful, 15.1% were not entirely satisfied with process or outcome but felt surgery had been worthwhile as there had been some improvement.