What is Parkinson’s disease?

What is Parkinson’s Disease?

Parkinson’s disease is the second most common neurological function and structural (neurodegenerative) disorder. it is a progressive nervous system disorder form which our body movement is affected the symptoms vary person to person and typically affects only one side of the body. Parkinson’s disease happens when your nerve cells or neurons, in your brain that control movement become impaired and/or die. Normally these neurons produce dopamine. This is not a fatal disease and the people affected don’t die because of this disease.

What happens to your body during this disease?

If you have this disease you act weird you don’t know what you are doing then, it starts losing dopamine and as you have this disease manufacturing of dopamine will also stop, so when you lose 80 percent of your dopamine symptoms such as tremor, slowness of movement, stiffness, and balance problems occur and also your reflexes get slow.

-The general symptoms are :-

*Tremor – Tremor in a limb, often in the hand or fingers at rest, a back-and-forth rubbing of your thumb and forefinger, known as “pill-rolling”
*Slowed voluntary movement – Reduced ability to move and walk, and dragging feet with smaller steps as well as difficulty in rising from sitting/getting out of a bed/chair
*Orthostatic hypotension – Lightheadedness or dizzy when standing
*Rigid muscles – Muscle stiffness and abnormal tone in the body limiting your motion and causing pain
*Impaired posture and balance – Stooped posture, unsteady balance 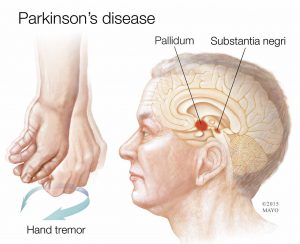 Impact of the disease on individuals and society

Parkinson’s disease also affects patients’ self-confidence, and thus impairs their ability to maintain or create new social ties. Even the more subtle physical symptoms can have social implications. Research conducted in McGill University discovered that the way Parkinson’s patients speak causes people to perceive them in a negative light. According to the research, the softer, slower, and sometimes disorientated speech that patients often develop as their condition progresses, triggers unfavourable impressions from people around them. And as such the symptoms of this disease are so physical which may stops the person to be socially connected.

Which other parts are affected during Pakinson’s Disease?

Diagnoses of this disease

– Complete Medical history with review of signs and symptoms, complete with a neurological and physical examination
– And different Imaging tests – such as MRI, Ultrasound of the brain, SPECT and PET scans

There is no transplantation of this disease as it is directly connected to our brain but we can control its symptom by medication or surgeries.

Ethical- Many ethical issues arise in the final stage of life and each country has agreed practices to follow. Ethical frameworks vary depending on where you live so it is advisable to talk to your family doctor or other members of your care team to get more information on local guidelines.

Economical- Patients with Parkinson’s disease (PD) experience progressive disability and reduced quality of life due to both motor and non-motor complications. The cost of illness escalates as PD progresses, placing an economic burden on the healthcare system, society and patients themselves. Indirect costs arising from lost productivity and carer burden tend to be high. The total cost in the UK has been estimated to be between pound 449 million and pound 3.3 billion annually, depending on the cost model and prevalence rate used

Social- Parkinson’s disease can have an impact on relationships, including friendships. Friends may feel hurt if you reach out less often, unaware that apathy and fatigue are common Parkinson’s symptoms. If your symptoms are unpredictable, you may also feel less inclined to make firm plans in advance. But while the disease may change how you spend time with your friends, it doesn’t have to herald the end of socializing.

And the ages affected are :-