Epilepsy. A neurological disorder that is associated with unusual brain activity which causes, blackouts, seizures, and loss of awareness. Epilepsy is such a disease that it plays with our senses to an extent that one detaches from their surroundings, and loses consciousness. Epilepsy doesn’t discriminate age, ethnicity or financial backgrounds, it is a disease that can happen to anyone at any time. 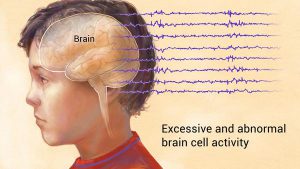 Some common symptoms for this disease are the ones listed below:
– Uncontrollable jerking movements
-Temporary confusion
-Fear, anxiety,deja-vu
-Loss of awareness

Epilepsy can be caused by various aspects such as genetic influence(it is at times hereditary), traumas, brain conditions(strokes), infectious diseases such as AIDS, meningitis and viral encephalitis, prenatal injuries(poor nutrition when the child is in the womb, etc.) and developmental disorders like autism.

It is only unimaginable how epilepsy can affect individuals and societies. When someone is diagnosed with such a disease, it is only normal that they need support, emotionally, physically and financially. It is hard for families with lower incomes to pay for treatments for epilepsy but is not easy for wealthy families either. Epilepsy can cause seizures at any time(it is unpredictable), so the person diagnosed must be surrounded by people to take care of them at all times, even when bathing. Epilepsy certainly does impact the patient surrounding but it is difficult to accept that you don’t completely own your body. A patient suffering from epilepsy can often feel socially isolated because they have no control over their body or brain and they fear the reactions of strangers to their seizures.

Body systems that are affected due to Epilepsy:
1. Central nervous system (CNS): The brain is a part of the central nervous system and the part of our system that controls our voluntary and involuntary actions. Epilepsy affects our consciousness, hence brain.
2.Muscular system: Some types of seizures in epilepsy changes the muscle tone of a person, for instance, a tonic seizure can tighten up, lock a person’s muscle.
3. Reproductive system: Epilepsy doesn’t directly affect the reproductive system, however, a pregnant woman with epilepsy faces more seizures than normal and that inevitably affects the child. The child may be born with epilepsy.
4.Respiratory system: People suffering from epileptic seizures may find it hard at times to breathe, sometimes the breathing issues cause choking and can even lead to death.

Transplantation can’t really help with the treatment of epilepsy, as epilepsy is due to the abnormal activities in the brain and the central NERVOUS system. Transplantation isn’t a cure to this disease, however, people who have gone through transplantations have a high chance of having seizures. (This is because of the sedatives, narcotics, and anesthetics used, which affect the process of neurotransmission).
The treatment of epilepsy includes:
-Antiepileptic drugs.
-Surgeries to remove parts of the brain that are causing seizures.
-Ketogenic diet.
-Vagus nervous system.

Vagus nervous system costs around $20.000, which can be an issue for people with low income, as if they have epilepsy, it would b hard for them to work and earn for the treatment(since they have no control on them) and also that because epilepsy is hereditary, if once infected, it can run through generations.
Vagus nervous system has an ethical consent, thus, is safe, reliable and ethically correct.