Have you ever imagined a disease that breaks you from the inside and weakens you? Sickle Cell Anemia is an inherited form of anemia where there aren’t enough healthy red blood cells to carry adequate oxygen throughout your body. Normally, our red blood cells are flexible and biconcave in shape, moving easily and carrying enough amount of oxygen through our blood vessels, in sickle cell anemia, the red blood cells become rigid and sticky and are shaped like crescent moons. These irregularly shaped cells can get stuck in vessels, which can slow or block blood flow and oxygen to parts of the body. Can you imagine how much discrimination is faced by those sickle cells, have a look below 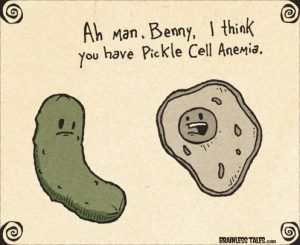 These sickle cells can hugely impact a person’s body such as :-

1.Painful swelling of hands and feet

These criminal sickle cells even have an impact on a person’s psychology who is suffering from the disease. According to research conducted in sickle cell clinic, Lagos, Nigeria, people were diagnosed suffering from depressive and self-hate feelings because of inability to work for their family and their nation. 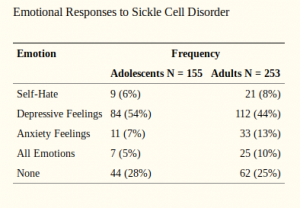 A blood test can check for hemoglobin S — the defective form of hemoglobin that underlies sickle cell anemia. Usually, a blood test is a part of each and every newborn in the World.

If you or your child has sickle cell anemia, a blood test to check for a low red blood cell count (anemia) will be done. Your doctor might suggest additional tests to check for possible complications of the disease.

If you or your child carries the sickle cell gene, you’ll likely be referred to a genetic counselor.

Sickle cell disease is an inherited blood disorder. It is marked by flawed hemoglobin. That’s the protein in red blood cells that carries oxygen to the tissues of the body. So, sickle cell disease interferes with the delivery of oxygen to the tissues. The sickled cells also damage the spleen’s filter. This puts you are at greater at risk for infections.

Role of Transplantation and Scientific Advances:-

Because of the risks associated with a bone marrow transplant, the procedure is recommended only for people, usually children, who have significant symptoms and problems from sickle cell anemia.

Scientists are studying new treatments for sickle cell anemia, including:

Gene therapy:-Researchers are exploring whether inserting a normal gene into the bone marrow of people with sickle cell anemia will result in normal hemoglobin. Scientists are also exploring the possibility of turning off the defective gene while reactivating another gene responsible for the production of fetal hemoglobin — a type of hemoglobin found in newborns that prevents sickle cells from forming.

Potential treatments using gene therapy are a long way off, however.

These transplantations are conducted only in severe conditions, as the procedure requires a lengthy hospital stay. After the transplant, you’ll receive drugs to help prevent rejection of the donated stem cells. Even so, your body might reject the transplant, leading to life-threatening complications.

A normal bone marrow transplant cost $800000 in the United States which is not affordable by everyone.