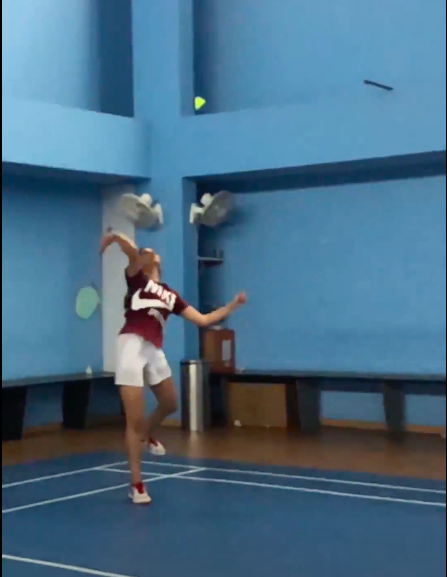 Badminton is a racquet sport in which players hit a shuttlecock across a net with racquets. The most common forms of the game are “singles” and “doubles,” though it can be played with larger teams. I decided to take badminton lessons as part of my CAS project and learning course. I began with a four-month badminton course, during which I learned new skills and improved my technique.

Before I started classes, I had a basic understanding of the sport’s rules, which helped me progress more quickly and compete with other students in my class. I consider myself to be a quick learner, so staying on the same page with others was extremely beneficial. The class was only 2 minutes away from my house, which was a big plus in terms of convenience. I was shy at first because I didn’t know anyone in the class, but I eventually got along and made friends with whom I could interact.I realized I had very little experience and knowledge of playing professionally, so I decided to devote more time to drills to improve my skills. I overcame this shortcoming by practicing the drills whenever I had free time at home or during class.

Sprained ankles and wrists were probably the most difficult challenge I faced. I got some sprains as a result of a lot of practice, which my coach said was normal. As a result, I had to miss some classes in order to avoid further injury. Before joining the class, I had played badminton several times but never to this extent. I overcame this obstacle by resting and doing less strenuous drills at home. I had trouble learning to play Smash because it was new to me, but with daily practice, I was able to improve.

Commitment and endurance were demonstrated as I attended the classes 6 days a week and could see my skills evolve and new game tactics were created. I was able to increase my speed, stamina, and gaming skills by demonstrating such dedication. Because I could see the impact, I felt that all of the time spent was worthwhile. It was critical that I practice shot and smash shots on a regular basis in order to maintain my learning.

I was initially timid because I was an unknown to everyone, but as I became more active in class, I made some new friends with whom I played matches. Collaborative work was a challenge when doubles matches were played. During the game, the partners must maintain shifting training and trust each other. The very experience has improved my team leadership skills.

The overall experience of badminton was incredible, thrilling, exciting, educational, and enjoyable. I realized I can use my sportsmanship skills in a variety of scenarios and interactions. I’ve learned a lot of drills that have helped me improve my playing style and reinforce this sport.