To save someone’s life, it is important to understand the problem. In this post, we will discuss cardiac arrests! So, what are cardiac arrests? A cardiac arrest is the abrupt loss of heart function in a person. It is not necessary for the person to have been diagnosed with heart disease. It can occur suddenly, or due to other symptoms. Cardiac arrests are often fatal if appropriate steps aren’t taken immediately. 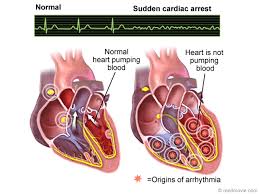 Sudden cardiac arrests occur suddenly and often without warning. It is triggered by irregular heartbeats (arrhythmia) due to electrical malfunctions in the heart. Since the pumping action is disrupted, the heart cannot pump sufficient amount blood to the brain, lungs and other organs, and consequently, the organs will not get enough oxygen and nutrients. Seconds after a cardiac arrest, a person loses consciousness and has no pulse. The person will die within minutes if he/she does not receive treatment. Cardiac arrests affect all the human body systems, because they will not get sufficient blood, and consequently will not get oxygen, nutrients, and energy. Hence, the cells will not be able to function normally.

It is possible to avoid the chances of cardiac arrest. There are several symptoms which may occur before the arrest. These symptoms include chest discomfort, shortness of breath, weakness, heart palpitations, rapid or irregular heartbeats, episodes of fainting and/or lightheadedness. If this occurs to you or someone around you, consult a doctor as soon as possible. This may even save your or their lives!

After diagnosing cardiac arrests, doctors may try to learn more information in order to avoid future episodes. They may do this through an ECG or electrocardiogram test (the most likely test), blood tests, chest x-rays, echocardiograms, nuclear scan, coronary catheterization (angiogram), etc. These tests will allow them to understand why the victim underwent a cardiac arrest and may be able to solve their problems.

There are long term treatments of cardiac arrests as well. Doctors may prescribe various anti-arrhythmic drugs for the treatment of arrhythmia or potential arrhythmia complications. As a side effect, an anti-arrhythmia drug might cause your arrhythmia to occur more frequently, or even create new ones! Other similar drugs include angiotensin-converting enzyme (ACE) inhibitors and/or calcium channel blockers.

After the patient’s condition stabilizes, the doctor is likely to recommend an ICD, or implantable cardioverter-defibrillator is a battery-powered unit that’s put into the patient’s body near their left collarbone. One or more electrode-tipped wires from the ICD run through veins to their heart, and constantly monitors their heart rhythm. If it detects a rhythm that’s too slow, it paces the heart as a pacemaker would. If it detects a dangerous heart rhythm change, it sends out low- or high-energy shocks to reset your heart to a normal rhythm. 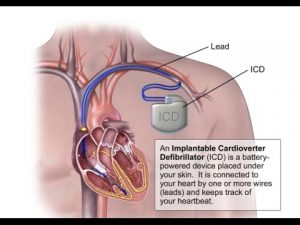 Using an ICD has several implications, majorly economic, geographic and scientific. An economic implication is that it costs way too much! According to the ICD registry, the approximate procedure and device replacement cost are about $37,000, excluding physician and anaesthesia fees. The six surgeries this patient would require could cost more than $220,000 and also require out-of-pocket expenses. Next, geographical implications include the fact that it is not available everywhere, and not many surgeons are proficient with ICD surgeries. A person may have to travel to developed countries like USA, UK, etc, for treatment, which will just add to the budget.

However, the scientific implications or positive. Even though implanting an ICD will not make a dead patient alive, they are the most effective treatment to significantly improve survival of these patients. In most cases, people with an ICD implant usually live for 7+ more years than those without, in the same circumstances. Therefore, before implanting an ICD, it is important for you or the patient to understand, and compare and contrast all implications before reaching any decision.

There are several other surgeries for this condition as well, however technology ensures that they are not required, unless the patient’s condition is rather critical, in which case, the doctor may prefer a coronary bypass surgery or a corrective heart surgery. Heart transplant procedures usually do not occur for cardiac arrests.

It is important to learn possible symptoms, diagnosis and treatments of cardiac arrests. Approximately 200,000 cardiac arrests occur each year in hospitals, and 24% of those patients survive. Estimates suggest that cardiac arrest is the third leading cause of death in the U.S. behind cancer and heart disease. Around 85% of most cardiac arrest patients die before they even come to the hospital because of a lack of knowledge. The death of these many people has direct and indirect implications for the entire society because if the breadwinner of a family dies, the entire family will descend into poverty. Supply chains may be disrupted if ahead of a major organization dies, etc. Death has a lot of implications, and since cardiac arrests are one of the leading causes, it is best to be prepared.

There it is! Now you can hold your own against cardiac arrests, and save your life and the lives of people around you. All the best!