Alzheimer is a disease which is getting to more and more people daily. With more than 1 million cases in India yearly . In Alzheimer there are 7 stages as the stages increase it gets worse and worse. It is a disease which cannot be cured but basic  treatment is still  given on it. The early symptoms of this disease could be not remembering recent events.  Alzheimer when caused in brain harmful proteins build up which are called ¨amyloid¨. These proteins make large clumps, 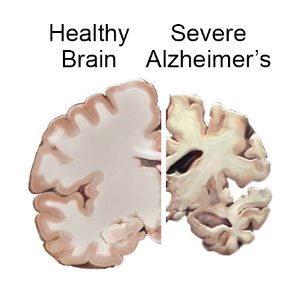 called tangles and plaques. They get in the way of normal brain function  and starts eating healthy cells. As shown in the photo as the left side of the brain is of a healthy person who is not suffering from Alzheimer. The right side of the photo shows that a person who is suffering from 6th stage of Alzheimer where the person needs constant supervision and tends to forget people who are not close friends or family. They even need help for basic things such as toileting and bathing. They even stop taking care of themselves.

Scientist throughout the world are researching upon to find this cure. They have been using different techniques such as immune therapy and lifestyle changes. According to a source, Scientists at MIT are trying strobe light and ticking sound which will be given 40 times a minute  they had first tried on a mice which showed significant change. But the question is “Can improvements in brains of mice translate to human subjects?¨ This is a type of disease which cannot be cured and cannot be prevented as well.

This disease has a treatment which can be used when in the earlier stages of Alzheimer  different types of doctors provide different medications which can help decrease the blood pressure level and improves mental function and can even affect the change in mood of a person. There are five types of specialists which can help you which are Occupational Therapist( Improves daily living and work skills of patients), Geriatrician ( Focuses on health care of elderly people), Neurologist (Treats nervous system disorders), Psychiatrist ( Treats mental disorder primarily with medications) & Primary care provider ( Prevents, diagnosis and treats diseases )

Alzheimer being a disease with limited treatments cost very much on the medicines. As the medication provided by the specialist may not be available where you live and it could not be afforded by a low class income family. As per statistics Alzheimer is moreover caused to people who are in there 60´s and the people who are above the age of 60. When caused many people die as they reach to the 7th stage as there body does not respond to anything and your brain size is almost cut to the half,  Eventually people start dying .Many countries offer free medications from Alzheimer’s for the people who cant afford it and the people who are at a stage where it can be prevented.

Alzheimer when causes does not only cause the brain it even causes other systems in the brain such as the whole nervous system as you brain does not send a correct signal you body does not respond to it.

As Alzheimer’s is caused it causes very much deaths and families get broke as if the person does not remember his close friends and family and is needing 24 hour supervision.