The disease which has captured 65 million people in the world

Read this post and don’t be the next one

Have you ever hear about the disease Epilepsy? Yes, or No, but wait doesn’t worry we’ll make you learn this complicated term in just 15 minutes. Try to read the full article may be you are or might be your habits are going to make you the next prey of this disease.

So what is Epilepsy?

Epilepsy is a brain disorder that causes people to have recurring seizures. The seizures happen when clusters of nerve cells, or neurons, in the brain send out the wrong signals. People may have strange sensations and emotions or behave strangely. They may have violent muscle spasms or lose consciousness.

Seizures are bursts of electrical activity in the brain that temporarily affect how it works. They can cause a wide range of symptoms.

Oh wait this is a lot of biological definition, I am sure this is what you might be thinking right so let me explain you this disease in simple words it’s a kind of brain disorder which is caused by our brain sending irregular electrical impulses which is not the regular behavior of the brain.

So the disease which is the fourth most common brain disorder what are its causes:

20% of people having epilepsy today there is basically no evidence for how did they develop it but Occasionally, epilepsy can be caused by damage to the brain, such as damage from:

Lets now see how does epilepsy impact you and your near and dear ones because epilepsy is a brain disorder, it can affect many different systems throughout the body. 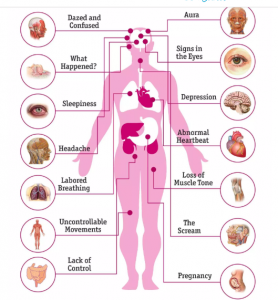 Epilepsy can affect you dear and near ones as epilepsy is a brain disorder, and we all know that brain controls mood and due to this brain disorder mood swings are caused. These mood swings can change you to act differently and this act of your can cause to develop cracks in your relationship. To prevent this just tell your family member “I am a patient of Epilepsy and I can have mood swings so please forgive me if I behave badly with you”.

Epilepsy accounts for 0.6% of the global burden of disease, a time-based measure that combines years of life lost due to premature mortality and time lived in less than full health. Epilepsy has significant economic implications in terms of health care needs, premature death and lost work productivity.

The economic impact of epilepsy varies significantly depending on the duration and severity of the condition, response to treatment, and the health care setting. Out-of-pocket costs and productivity losses create substantial burdens on households. An economic study from India estimated that public financing for both first- and second-line therapy and other medical costs alleviates the financial burden from epilepsy and is cost-effective (1).

Although the social effects vary from country to country, the stigma and discrimination that surround epilepsy worldwide are often more difficult to overcome than the seizures themselves. People living with epilepsy can be targets of prejudice. The stigma of the disease can discourage people from seeking treatment for symptoms, so as to avoid becoming identified with the disease.

People with epilepsy can experience reduced access to health and life insurance, a withholding of the opportunity to obtain a driving license or educational opportunities, and barriers to entering particular occupations, among other limitations. In many countries legislation reflects centuries of misunderstanding about epilepsy. For example:

Legislation based on internationally accepted human rights standards can prevent discrimination and rights violations, improve access to health-care services, and raise the quality of life for people with epilepsy.

How to identify you have epilepsy?

Because epilepsy is caused by abnormal activity in the brain, seizures can affect any process your brain coordinates. Seizure signs and symptoms may include:

Treatment can help most people with epilepsy have fewer seizures or stop having seizures completely.

Idiopathic epilepsy is not preventable. However, preventive measures can be applied to the known causes of secondary epilepsy.

To conclude if you feel that you are a person suffering from epilepsy than don’t worry as this is a common disease and just one thing please don’t go late for treatment.