My activity was to play Chess. It was a demonstration of Creativity. I played chess on Chess.com app on my mobile phone where I played 5-7 games of chess where each player had 10 minutes and I also solved daily puzzles, which are classified in two parts, rated and learning. In rated puzzles, the puzzles count as points where I have to solve them correctly within a given amount of time in only 1 life. This improves my critical thinking skills as I do my calculation mentally. Learning puzzles, however, are more casual and help me develop my skills without having a time pressure.

I had played chess till Grade 8 but I left it because of the burden of studies. Now that we do not have physical school, I found time to play chess. Chess encourages thinking on feet and brain activity, as there is a lot of thinking involved.

Learning Outcome 1: Identify own strengths and develop areas for growth

As I mentioned, I had previously played chess but I left it because it got really difficult to manage time between schoolwork and chess. This used to be one of my strengths and I identified it and developed my critical thinking skills.

In chess we have rating, which is basically the points each player has. In real life, I have a rating of approximately 1100, but on chess.com, I had to play with people who had ratings of above 1500. Also, solving the puzzles was a challenge every time because they have puzzles which force you to think 4-5 moves ahead and it requires a lot of analysis to think at that level.

Learning Outcome 3: Demonstrate how to initiate and plan a CAS experience

I had previously played chess, so I knew the basics of it and I also had a chess.com account so I also knew how to operate chess.com. This previous knowledge also helped me a lot in this CAS activity. Chess.com also allows 1 free lesson each week and I also did that to sharpen my skills.

As I mentioned, I played chess everyday and sometimes specially took out time to play chess on busy days, even during the time when exams were very near. I also liked playing chess, and that is what fueled me to got further and show perseverance.

To conclude, it was really fun playing chess after a long time. I did it for CAS only, but I will now continue playing more as I really like the game and we do not have physical school as of now. It also improved my critical thinking skills. 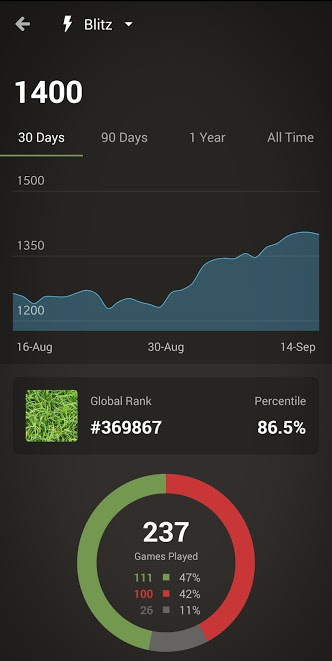